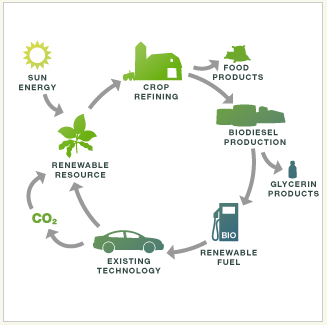 Biodiesel is an alternative to petroleum-based diesel fuel made from renewable resources such as vegetable oils or animal fats. Unlike petro-diesel, biodiesel is non-toxic, biodegradable, and significantly reduces toxic emissions when burned as a fuel. Biodiesel can be used in its pure form (B100) or mixed/blended with petroleum. The most common blend, B20, 20% biodiesel and 80% petroleum diesel, improves emissions and adds lubricity. Engine lubricity has become an increasing concern as the Environmental Protection Agency's 2006 ultra low sulfur mandate has been enacted. A biodiesel of B2 to B5 is sufficient to replace the engine lubricity lost from sulfur removal. EPA considers B20 an alternative fuel that is helping government fleets to achieve standards for renewable fuel usage.

What types of vehicles can use Biodiesel?

Biodiesel can be used in any diesel engine without modification. It must be noted that biodiesel is a solvent or cleaner and can stir up sediment in fuel tanks and degrade rubber fuel lines. Routine inspection and maintenance including replacing fuel filters and fuel lines will provide for a smooth transition to biodiesel. Filter clogging and fuel line degradation are noted when using blends higher than B20. Applications include passenger vehicles, buses, delivery trucks, waste disposal, construction and farm equipment, and boats. Currently more than 300 major fleets use this alternative fuel, including many federal and state agencies, and major public utilities. Throughout the nation, more than 25 million gallons of biodiesel are consumed annually. (National Biodiesel Board and DOE EIA)

Biodiesel performance is approximately equivalent to petroleum diesel, with only a slight reduction in fuel economy due to decreased energy density (Btus/gallon). Biodiesel is a better lubricant than petroleum diesel, extending engine life and increasing time between oil changes. ASTM (American Society for Testing and Materials) International issued a final specification for the fuel to insure quality. Consumers should be sure that their biodiesel meets the ASTM D6751 standard.

The use of biodiesel results in significantly lower emissions of carbon monoxide, sulfur dioxide, particulate matter, toxic contaminants, hydrocarbons, and visible smoke and noxious odors. The use of biodiesel can result in a 75% reduction in carbon dioxide emissions, as the carbon sequestration during the life cycle of growing oilseed crops mitigates the carbon dioxide produced during combustion.
According to the National Renewable Energy Laboratory, emissions characteristics of B20 relative to petroleum diesel are as follows: